I quite liked posting on Thursday of last week.  Let’s do it again!

I have a feeling the game won’t, in fact, be feature complete by the deadline I set, but… that doesn’t mean I won’t try anyway!

This week included adding some new features and some playtesting at Boston Indies, which met on Monday.

The biggest flags I noticed on Monday were:

†I’m not sure whether or not this is true, given the rebalancing I did of bursts.  Certainly when I played 3-player before, a Burst Troll could cause a pretty big upset — a good thing to consider though… could that player ever make it to 1st from last?  In any case, I think there are two things going on here. (1) Players perceive that player-v-player interaction isn’t beneficial to winning, and (2) player-v-player interaction might just not be beneficial to winning.  The perception issue is a tricky one; even if the interaction is beneficial, if players think it isn’t, the have little-to-no incentive to interact and find out.

I’m also becoming of the opinion that the speech-bubble tutorial isn’t cutting it (though maybe I’ll change my mind once people who play without it are even MORE clueless), as players still sometimes ask me questions the tutorial was meant to answer.  I’ve also gotten feedback that it’s obnoxiously large and obtrusive.  I must admit; when I play with it on, I try to make it go away as fast as possible.  That’s not a huge issue, as the tutorial is intended only to appear once (unless set on by the player), but I’d like it to not be something players will ignore because of how annoying they find it.

Now that I’ve mentioned a bunch of issues I’ve uncovered… let’s look at all the things I did that didn’t really resolve any of that (mostly) but that I think resolved other issues maybe!

I didn’t explicitly mention this above, but a few playtesters asked about the crown.  I’m not sure if this helps, but I wanted to go-big-or-go-home with it (and… of courrse, I really wanted to make it have a rainbow trail).  I added the particle effect to make it more obvious that “hey there’s this thing marking this player,” even when you’re standing still (the crown itself is pretty stagnant), and hope that the rainbow will help make the motion even more apparent.  I have not yet color-blind-tested it, but I want the final version to read for the color-blind as well, of course.

I put the little heart on the head of the trail to mask the edge, but I kinda like the way it looks.

The particles also happy-accident-masked some of the not-so-nice-looking thing that happens to the trail when it passes over itself (you can see slight “creases” in the rainbow — the gif’s not great quality, but if you look, you can see it in this one).

More Pictures in the HUD

Man, it would be great if I could just convey everything players need to know in the HUD in an unobtrusive way and could just get rid of the tutorial…

The images here, by the way, don’t exactly convey everything that the tutorial did.  Just as a refresher, the tutorial previously ran through the following steps (approximately):

There was more method to my culling than a lack of space (though… that was a big contributor, not gonna lie).

Unlike the bubble tutorial, this tutorial doesn’t name buttons or say what to do with them, it just shows pictures.  In particular, I think the conveyance of “left stick” was a little weak in the bubble tutorial (I got feedback on that one in particular; a player didn’t know what it meant, and thought it had to do with going to the left; granted this player was playing the keyboard-proxied version, but still… I don’t want people to be confused, and most people figure out that control intuitively).

I’ve condensed the two “A” button steps into a step because no one seemed to care that pressing “A” attracted bees in the abstract.  I changed the phrasing a little too, since I’ve realized that “suck” as a verb implies some hold-down-ed-ness that “get” doesn’t.

I hope that the pictures help, especially the picture next to burst attack.  I really want players to explore that option, if it is, in fact, as fun as I thought it was.

The two things I’ve taken out that I’m most unsure-of are: (1) explicit ordering of steps, and (2) mention that stuff becomes empty.

I won’t be sure until I playtest more just how critical these two things are, but if I can do without them, all the better.

Oh, and I did implement one more thing to help convey the need to refill bees…

A much more dramatic thing than what I actually implemented, but…

Now when you have insects around you, and the insects don’t have pollen, dotted lines dash out from you to all the male flowers in the field that can accept your spent insects.

I hope this tells players “hey, go to this place.”

It’s possible people will just hate it and be more confused though.

Somewhat relatedly, it’s now a little easier to give bees/insects-in-general to male flowers, because, in changing some variable names, I set all bee infatuation times to 0, which means bees never go into an un-steal-able state.

I decided not to change the values back because I noticed players getting confused about when bees could be stolen — and more poignantly, I sometimes would get confused by this unless I was paying attention to the little hearts, i.e. looking for them specifically.

The consequence of this change is that it’s now quite difficult to capture bees from a male flower when it’s attracting, but this is less of a problem than it was before male flowers turned off eventually (by running out of pollen and needing to recharge).

They’re pretty straightforward; they’re bees that can store more pollen.  That’s about it.

It’s good to have some simple stuff I think.

The much-requestd Wasp has joined the fray!

Before I talk about what they do, by the way, just to let you know, oh Imaginary Reader, according to teh Interwebz, wasps, are, like just total assholes.

Accordingly, and as people had suggested, wasps are just total assholes.

They create Bursts whenever they collide with a flower.  This could be you, or…

…this could be one of the male flowers.

I haven’t play-tested the wasp stage, but I’m interested to see what players think of it, and whether or not they’ll just plain hate it.

Wasps make the just-suck-on-bees game a little more interesting, because you can gift someone a wasp to really mess up the suckage, launch them (they stay on fire for longer than bees), launch them at flowers to make a flower essentially a death trap, use them as a battering ram…

I’m sure they’ve got other uses too.

I haven’t yet combined them with other things, but I’ll bet they’d be really nasty when paired with butterflies.  (Finally you could have a batterfly!  Though… stealing with butterflies is kind of like butterfly subterfuge… so… butterfuge?   Speaking of which, I wonder why I haven’t considered moths yet, if I’m going with the “this is a thing that looks sorta like this other thing”)

I haven’t written much about orbital distance for, like, any of the insects, by the way, but I decided that wasps should orbit a bit farther away than the others.  Butterflies do too, but I think for wasps, it’s especially important that you can hold them at a distance.  Because of this, it is actually possible to suck on bees while holding a wasp without causing a Burst, but you do have to be very careful about it.

I like the idea of making content be level-based, so that content unlocking can just be “you’ve got a new level available, and it has some new stuuuuuuff” 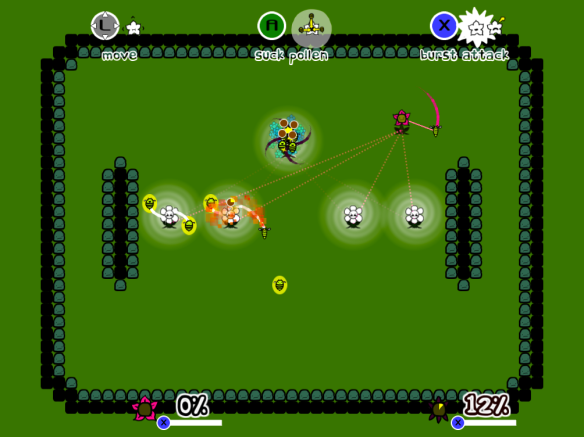 I doubt these will be the final stages, but here were the Queen Bee and Wasp stages I made.

The old version of the wasp one actually had an unanticipated consequence of male flower placement I really liked; the wasps would jump between the flower pairs.  Some setting I changed caused that to vanish though, sadly.  Perhaps I’ll revive it if I go with a layout like this.

Misc. Stuff I Want to Do to Help with Stuff:

I think this about sums stuff up for this week.